My current jazz odyssey involves transcribing some tunes. So I played around with lilypond/lilyjazz for the first time while transcribing Sonny Rollins’ solos on St. Thomas.

Lilyjazz is quite nice – the output really looks like the page was ripped out of the Real Book and much more readable than anything I have ever written out by hand.

I admit to not knowing the rules about how best to spell notes or rhythms so a few things probably look weird, and I glossed over some of the fast parts. Still, it’s not terrible for a first try.

As for this solo, what caught my ear initially was how well one measure leads into the next, and there are plenty of examples of nice voice leading in here. But after writing it out, the quarter notes in bars 41-42 and 76 stand out to me — just great examples of tension and release. I also missed on first hearing how Rollins returns to the opening motif at various points like bar 31, giving it a nice thematic completeness.

Anyway, lilypond source and the second page are in my github. Corrections welcome.

Note: I transcribed it in C for piano / guitar; lilypond can transpose automatically for other instruments. On guitar, I find 5th position is the most comfortable spot to play it. Although 8th position is a typical place for C major, I find the notes sound too muddy on the 5th and 6th strings. 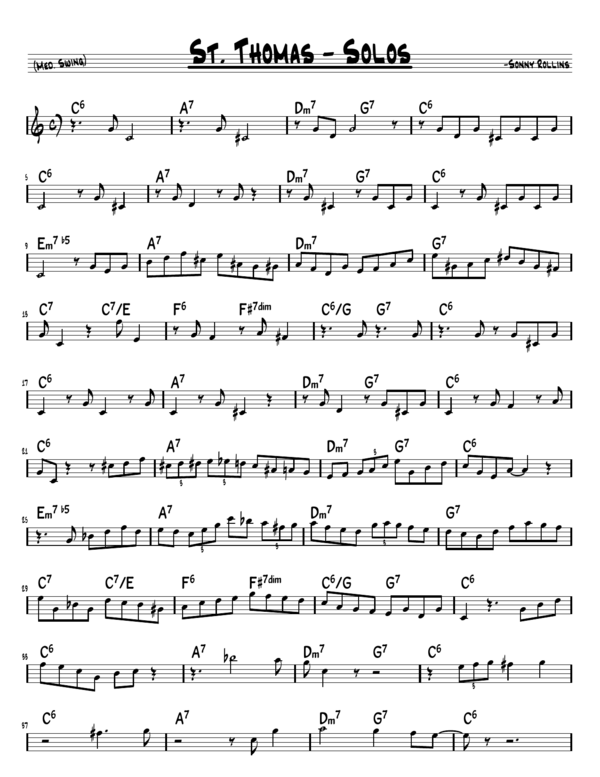 To add a little space to our cozy apartment, I put up a couple of guitar wall hangers over the weekend and put the cases in storage (don’t tell our leasing office). It looks pretty cool, though I do think the guitars want 8 or 9 more friends. I just hope this isn’t the start of the inevitable transition from guitar-as-instrument to guitar-as-display-item.

It’s been a while since I’ve seen a good band. Well, not too long ago — we saw Los Lonely Boys in Honolulu during our honeymoon. I meant to write that up, but what more is there to say than they are a capable cross between Santana and SRV? Anyway, the fact remains that I’ve seen many fewer shows this year than in recent times.

That is why when I saw that John Patitucci is playing tomorrow night with a 3 piece including the most frickin’ awesome drummer alive, Brian Blade, for only $25 at the Kennedy Center, I had to grab a pair of tickets. (The KC has a jazz club? Who knew?) Patitucci is most well-known as the bass player for various incarnations of Chick Corea bands, and if he doesn’t set the crowd ablaze, I’m sure Blade will.

As the ticket says, last night we went to the State to catch Al Di Meola, who is touring in support of his new CD Consequences of Chaos. Amazing show replete with Di Meola’s signature blazing-fast yet incredibly clean lines. The Project led off with a few selections from the new CD, then went into Azzura, Fugata, and from there into a rousing rendition of the Santana-like single from the new CD, “Red Moon.” The band took a break and came back with Al playing a few Piazzolla pieces solo on his nylon string guitar, the last teaming up with pianist Mario Parmisano who unfortunately loaded up the bandoneon patch on his keyboard (can’t we pretend those instruments never existed?). After that, Al picked up the PRS again, launched into “Turquoise” off of the new album, then the Chick Corea tune “Senor Mouse.” I can’t remember what finished up the set, but the encores were ambitious: “Race With the Devil” followed by “Egyptian Danza.” The only flaws in the performance lie at the feet of the sound engineers who had problems with feedback in the middle of the show, poor mixes, and a speaker that was picking up a radio station as if it was right out of Spinal Tap.

Bob,
We appreciate you coming by on Wednesday. Your playing was awesome, however we do not feel that that style would fit in the direction that we would like go. Good luck in your future endeavors.

Well, Herring and the boys put on a fine show last Friday night. Rodgers reprised his Codetalkers role as the twangy-voiced banjo picker, Herring blazed through his usual set of chromatic runs and intervallic melodies, Sipe served up an amazing drum solo, and Fountain rounded out the group, hefting a six string bass to sub-1kHz heights. I will admit to nearly falling asleep during some of the more wordy songs, especially the one about unicorns and rainbows, but the odd reference to guts splattered on walls reeled me back in. I wouldn’t mind seeing JH let loose a bit more, but of course I’m biased.

In other guitar hero news, I have an audition tonight. This will actually be the third band I’ve auditioned with post-SD, to no avail so far. We’ll see how it goes.

Wondering what to do this weekend? Well here you go: Herring, Rodgers, Sipe, and Fountain are playing at the State’s late show on Saturday. Yup, that’s Jimmy Herring (ARU, ProjectZ, Dragonflies, Jazz is Dead, Codetalkers), the best unknown guitarist alive today. Rodgers (Codetalkers) is no slouch himself. The other guys I have no idea, but I do know this will be a kick ass show. 10pm. I am a bit late in getting to the requisite blog entries. Partly that is because my Dell laptop is sucking now. After only having the thing for two years, the power connector has broken internally such that batteries can no longer be charged; this appears to have happened to many many other Dell laptop owners. Great work, guys. So I take back any good things I said about Dell, especailly after half the desktops at work showed up with bad RAM.

Anyway, the Shinedown/Trapt show at Ram’s Head was great. Trapt led off, lead singer Chris Brown causing the womenfolk to swoon at his sensitive yet profanity-laden lyrics, punctuated with his ever-unnecessarily-flexed biceps. Brent Smith of Shinedown won the most acrobatic award, doing a nice half gainer off of the balcony early in the set, along with a jump from the top of the ridiculously high drum riser that left the audience wondering if he sprained an ankle. Of course both bands pulled out all of the hits, Shinedown with SAVE ME and I DARE YOU, and Trapt with HEADSTRONG, STILL FRAME. Shinedown performed a cover of Skynyrd’s SIMPLE MAN with the help of the audience, then raged against the record industry and gave us advice on making it through our teenage years. In fact, teen angst seemed to be the big social message here and we got an earful from both bands about all of the people “putting us down” and how we could turn that into “positive energy” and whatever else the fuck. Back in my day, this would never have flown, but the mostly college-aged crowd didn’t seem to mind so much. Anyway the main thing is the music and both bands pulled it off, never eliciting my usual reaction to radio bands which is “wow they really suck live!” In fact Smith, though nearly hoarse at the end, was still hitting all of the high notes in the double encore. Both guitarists were energetic, and while there was nothing particularly exciting in the solos, they carried off everything effortlessly. Shinedown’s bass player had a nice solo groove in there at one point.

In all, definitely going to be a highlight of this concert season. Looking forward, we’ve got Al Di at the Birchmere coming up again, Chili Cookoff (maybe)… and uh that’s all I have so far.

As soon as I discovered that it wasn’t Chris Cornell behind a certain song from the point of view of the overmedicated, I’ve been enjoying Shinedown. So next Monday night, AC and I are going to see if their stage show holds up to the CD. Also on the ticket is Trapt, whose song Still Frame was once played by my old band, and two bands with whom I’m unfamiliar. See you there at Ram’s Head Live in Baltimore, doors open at 7pm.