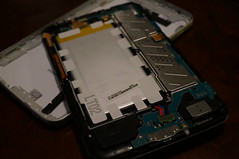 If you want to experience what it is like to be the first person to ever do something, might I suggest turning on all the debug knobs on an Android vendor kernel? Some speculative fixes over here, but there is still at least one other RCU bug on boot, and this use-after-free in the usb controller driver:

I guess I should try to find out where to report bugs for these (predictably) not upstream drivers, but that seems like a total pain.

While stuck inside for days due to snow, I once again downloaded the Android source trees from the repos. I plan to update my Android wifi page with better, step-by-step instructions to go from nothing to a working set of wireless utilities on the phone. In the meantime, I’ve re-familiarized myself with the current Android build environment (for various values of current — this uses donut since as far as I know, eclair doesn’t have a definition for the Dream (G1/ADP1) phone yet).

I do have to say that things in this area have improved a lot. While it still took some google-fu to figure out which branch to check out to get the correct software (tag donut-plus-aosp), buildling the entire image from scratch was rather straightforward (. build/envsetup.sh; lunch aosp_dream_us-eng; make). My main complaint is that the build system is far too slow to use for day-to-day work. Is Google still not eating their dogfood here?

So far I have libnl, iw, and packetspammer now integrated properly via Android.mk makefiles, and a custom kernel plus the support modules for wl1251. Unfortunately, space is really tight on the system partition, so the TI driver had to go to make room for everything. I’m still waiting for someone to port the Android runtime to emdebian or maemo with /usr on the sdcard, but perhaps I’ll mess around with bind mounts until then.

It seems wl1251 SDIO doesn’t like the new power-saving code, so that is something else I’ll look into soon. For now, one can disable that in the driver or possibly via “iwconfig power off”.

After fixing the remaining ifup bug (as expected, it was easy), I have some initial numbers on the new kernel driver versus the stock vendor driver on the G1:

So, better on latency, worse on throughput. wl1251 is also quite a lot larger when taking all of cfg80211/mac80211 into account, though I didn’t spend any time trying to tweak the size in the build. Well, at least the code doesn’t make you want to poke your own eyes out.

The SDIO patches for TI 1251 (Android wifi chipset) are finally merged into wireless-testing, so they should be a lot easier to hack on now. That means the driver should make it into 2.6.32, though at a rather experimental stage. I did fix some crashes on ifup/ifdown since last posting, but there’s always more work to do. Current todo list includes better behavior for non-polling controllers (make the irq have a top-half), tracking down a device hang on reinitialization, pushing the msm_wifi.ko module, and on and on.

But I need to spend spare cycles on ath5k in the near term. John Linville recently remarked that he was sick of seeing bug reports that say “it works fine in madwifi,” and frankly, I agree. There’s little excuse for having a sub-standard driver given that we have had two fully open HALs for almost a year. Of course, that can be laid at my feet as much as anyone’s, so my plan is to install madwifi side-by-side with ath5k and do a lot of performance testing to see where we stand. ANI is the big missing feature; it will be useful to see how madwifi performs with and without it.

In other nerdy news, yesterday I scored a copy of Kernighan and Pike’s The Practice of Programming at the local used book store for $3. I’ve read the first five chapters so far. While I’ve been at this long enough to have already learned the book’s best practices (some the hard way), I really wish it was required reading at many of the places I’ve worked. You could do away with a lot of stupid coding standards documents by instead saying “read tpop, oh and please no studly caps.”

Kalle has posted a rebased version of my SDIO patches on top of the latest wireless-testing. I’ve done a little bit of testing with it — the driver starts up and loads fine, but once the interface goes down, it’s busted:

Exploring this further turned into a rather long yak shaving session because I wanted to get iw on the phone to do more manual tests, and I wanted to link it dynamically against bionic, the Android’s fork of a BSD libc. Here were a few interesting discoveries found along the way:

Right away, I intuited this was a problem finding libnl.so, but I was setting LD_LIBRARY_PATH. So I looked at the bionic linker source to find:

/* TODO: Need to add support for initializing the so search path with
* LD_LIBRARY_PATH env variable for non-setuid programs. */

So libnl.so had to go into the hard-coded library search path of /system/lib. That alone didn’t help, however. I eventually remembered that dynamically linked executables include the name of the dynamic linker in ELF headers, and on Android this is called “/system/bin/linker” instead of “/usr/lib/ld.so.1.” After fixing that (-Wl,-dynamic-linker,/system/bin/linker), the program just SEGVed at startup, so I added Android linker scripts and other random crap to the linker command line (much of it furnished by the very cool agcc wrapper script).

Almost there, but no available commands? A glance at the iw source revealed that iw sticks all that stuff into an ELF section which mostly disappears when you link with –gc-sections. So with that exorcised from my linker command line, I finally have a functioning Android iw that is dynamically linked against bionic libc and my own cross-compiled libnl.

One wonders if the pain of bionic is worth its benefits, unless a benefit was curing ennui: “I’m bored, let’s write our own libc!” Anyway, I should be able to produce the various wireless tools natively compiled for Android in short order now. After that I’ll pop my Android TODO stack to the task, “make it easier to build custom images in my build environment.” I’d like to customize the filesystem images to have all of these utilities and relevant drivers in the normal places rather than hanging out in weird locations on the sdcard.

Work on the Android wireless driver is stalled for now as kvalo is rebasing the patches. I believe the next step will be to take the platform code, which I have temporarily built into a module called msm_wifiÂ¸ and turn it into a platform rfkill device. Or something like that — this is what he and I came up with at the wireless summit. Then there’s an annoying stack trace because free_irq() happens in common code, but sdio irqs are somewhat different so that needs to be pushed down into the interface layer.

Meanwhile, my project for the weekend was to get wl12xx integrated into the UI. This is an area that is likely to change anyway, so I didn’t want to spend a lot of time to do the whole thing properly, but I did want to get the plumbing pieces done correctly, which means libnl-tiny plus wpa_supplicant with netlink (-Dnl80211) support. As it turned out, this was a somewhat frustrating ordeal of mismatching wpa_s and libnl versions and general cross compiling headaches, so I didn’t finish this yet.

I did, however, also try the wext driver with wpa_s which I already compiled using the Android port. There are a few special commands that the Android UI sends to the wpa_s control interface, so I stubbed out a few of those in the wext driver. Then I moved wlan.ko out of the way, replacing it with msm_wifi (the hardware library inserts the wlan.ko module when you enable wireless through the UI). With these changes, wl12xx initializes when you click the checkbox, but wpa_supplicant gets confused somehow so there’s still a little work to be done here. I suppose I should just patch some of the library code to know about the other driver in order to reduce the number of hacks needed to get it started.

So, wl12xx definitely works including transmission, but I still haven’t fixed the rough edges in the driver. However, I did bother to make a semi-permanent writeup on how to build and use wl12xx on the G1 as it currently stands. I hope to clean up the warts and submit the patchset next week. Meanwhile, I have a lot of ath5k bugs to work on. Enough for today though.

Success! Scanning with wl12xx on my ADP1 works. I’ll post more later but here’s a teaser. That’s a real SSID, however apt.

I won’t claim success until I actually transfer data, but so far, it looks like wl12xx SDIO support is baked:

Unfortunately, I can’t really test it yet because the wpa_supplicant already on the phone doesn’t support -Dwext or -Dnl80211, and there are no wireless-tools. So I need to cross-compile those before attempting to associate. In the meantime, here’s a very rough patch that implements the goods from wireless-testing wl12xx. I need to work on read() and write() – right now they are a copy of what is in the google driver because it appears the host driver has issues with RW_EXTENDED. I don’t believe the readb/writeb fallbacks should be strictly necessary. Ditto with the platform code, that needs a slightly better solution.