My garden experiment continues, mostly successfully so far. Here are my notes for how it’s worked out, to remind myself what to do next year.

I built a 6’x4′ cedar box from 1″x6″ planks, all cut to nearly the right length by the helpful folks at the local home center. Some stainless steel decking screws and nearly a ton of VegMax(tm) dirt later, I had my raised bed set up.

While hardening off, the seedlings were getting watered about once every 1-2 days, with 4 cups of water per 10 seedlings. By May 28th I had them all planted out in the raised bed, staked, and mulched. At that time they looked like this: 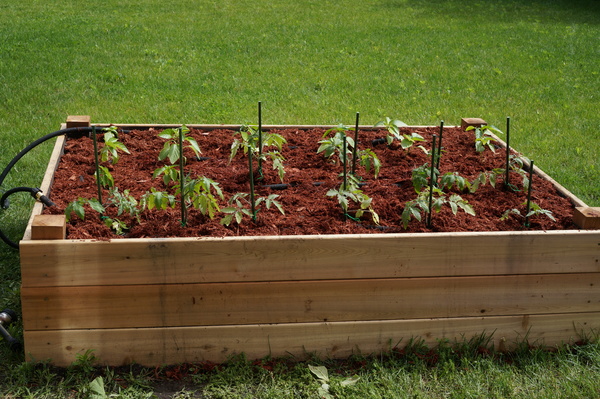 I put a pair of tomato fertilizer spikes about 6 inches from each plant that same week. Since then I have been spraying with epsom salt every two weeks, and since last week I have started alternating that with fertilizer. The bugs are numerous but I’ve used insecticidal soap sparingly: so far, there doesn’t seem to be a ton of insect damage except on lower leaves. I haven’t pruned the tomato plants that much, just leaves that are obviously low and touching soil. As this has been a very wet spring so far, I’ve only had to water them once since planting (15 min on soaker hose). 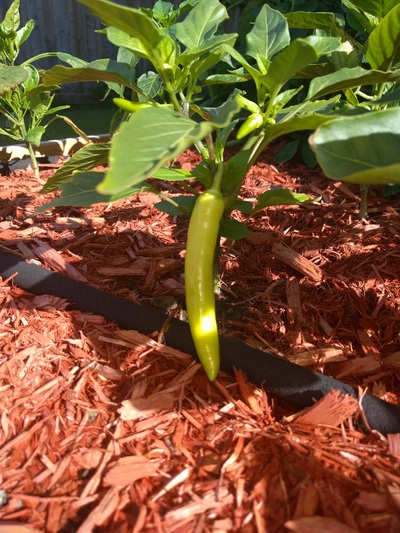 One of my peppers (serrano? yellow cayenne?) has yielded fruit. I’m not sure what the final color is supposed to be, but I may pick it soon anyway to speed along some other buds on that plant. I also have a 1″ bell pepper on another plant. Part of the fun of using a mix of pepper seeds is that I have no idea which plants are going to produce what.

I lost one pepper seedling shortly after planting due to high winds snapping the stem in half.

The basil is doing fine, and much more prolific outdoors compared to my indoor plants.

My largest tomato plant got its first flowers yesterday. I’ve restaked some of them with 6′ spikes as they’ve outgrown the 2′ spikes already. One definite mistake I made was to plant the tomatoes with only 1′ spacing. I moved three of my smallest plants yesterday to containers so that at least one or two of the remaining garden plants will have the proper spacing. The others will fight it out, so we’ll see how that goes.