Wmediumd gained the ability to do a simple contention simulation a while ago. It turned out to be a small change to the existing code: just ensure that any new frames are scheduled after any other queued frames of equal or higher priority from any other station.

Assuming the simulation is accurate, we might use this to gather some information about different kinds of wireless network topologies. For example: what is the throughput and latency like for a mesh network, as a function of hops?

The one sticking point is that it’s a bit of a pain to set up a bunch of mesh nodes with hwsim with their own IPs and routing tables. I’ve previously scripted this with send-to-self routing, but it’s a bit ugly. So I looked into doing this with network namespaces and controlling it all with tmux. The result is this fairly minimal script to launch a number of mesh nodes in a linear toplogy. From there one can easily run ping and iperf to gather some data, as in this chart: 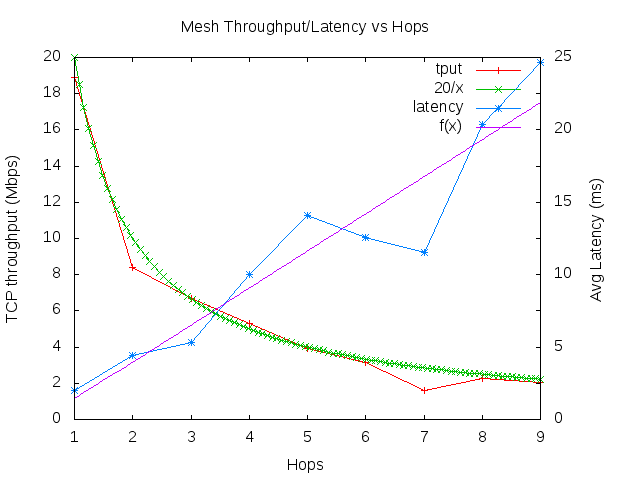 This image shows the result, and is in line with measurements that Javier Cardona had done on actual hardware. We can see that throughput is roughly inversely proportional to the number of nodes, while latency is directly proportional.

This may seem pretty bad at first, but makes sense when you consider that a radio transceiver can only listen or talk at once — it is all about radio physics, nothing to do with mesh specifically (which is not to say that mesh has no inefficiencies). Also this level of performance is when all the nodes are in range of each other; in such a case you’d be unlikely to have so many hops because the nodes would instead just peer directly with each other. So we might design our networks to avoid many hops, reduce the number of nodes in a given interference area, use fancy phy algorithms to enhance spatial reuse, or use multiple channels.

My plan with wmediumd is to use it in a bit more automated fashion to evaluate things like changes to HWMP — I think if we can identify topologies that people care about then it’s a bit stronger to say “this change always makes things better” if we can show repeatable before-and-after results from wmediumd.