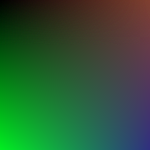 See anything hidden in this image? Believe it or not, it actually includes the source code that was used to generate it!


The program is, at least on some level, an example of a quine1. A quine is a program that generates its own code as output. Consider this perl program I wrote (there are many more ways to do this in perl, but this is the one I came up with):

This works by quoting the meat of the program in $s, and then printing this string along with all the cruft at the beginning and end, including the eval used to execute the print. The only tricky bit is to avoid terminating the single quotes, which I do using the chr function.

The image above was generated with a similar script, except that the body of the program generated the gradient. The other twist is that a simple form of steganography is used to store the source code: each byte from the source is embedded in the least significant bits of the pixels. Running the script with the image file (in ppm format) as an argument will then display the source.

To improve on this script, I'd like to use evolutionary procedural image generation (ala Karl Sims) to make the image actually look interesting.

[1] Named after philosopher Willard Van Orman Quine who championed reflective sentences like this one: "Is a phrase" is a phrase.